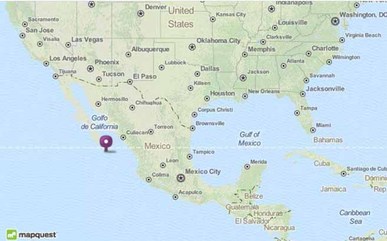 Just before the Christmas of 2009 Richard received an email from Lance Wallnau advertising a conference in Los Cabos, MX, which Lance called a “Dream Trip.” For the previous year, since Lance spoke at the ‘Kingdom Coalition Conference’ in Grand Rapids, MI, Richard had been taking an online course with Lance, called the ‘Seven Mountain Strategy.’ As the result of his being enrolled in this course, Richard was on Lance’s email list. The email advertised this conference at the RIU Santa Fe in Cabo San Lucas, MX. Rhonda’s response was, “That’s the lifestyle of the rich and famous, which certainly isn’t for us.” (For those of you, who are clueless [even as we were] about Cabo San Lucas or about the massive ‘all-inclusive’ resorts there, this was definitely not our usual style of conference or vacation). All of this to say, that within a couple of days the Lord nudged at Rhonda’s heart and said, “Go." The plans were made and we flew to Cabo San Lucas, MX the third week of January, 2010 (along with starting an online/CD Visual Link Spanish course, which we continue to work with).

While at the conference, through an unmistakable divine appointment, we met an evangelist named Bob Bradbury, who had been trained by Randy Clark from the Toronto Outpouring and had been the evangelist in an 18 month revival in Paraguay, extending to 4 years of ministry there. Bob kept telling us, that by the sense he had in his spirit, God was going to come to Los Cabos with a supernatural visitation of His Spirit similar to what He had done through Bob in Paraguay. Bob also shared that the Lord had him in Los Cabos for one to two months when the revival broke out. Since we were in year six of a five year commitment to the church we were at and already seeking the Lord as to where He would have us be, we gladly told him yes. The morning we were getting ready to leave the hotel where we were staying for the conference, the Lord spoke loud and clear (although not audibleJ) to Rhonda, “You’re not leaving a hotel, you’re leaving your destiny!”

From that time on, we communicated with Bob regularly as he let us know what information about the area he was looking for to help us prepare for the outpouring of the Holy Spirit. Due to Bob’s insistence that he was sure there would be a major outpouring in Cabo, Lance Wallnau planned to schedule Bob to have revival meetings in conjunction with Lance’s upcoming ‘Dream Trip’ in Cabo in May of 2010.

We committed to going back to Cabo the last week in February of 2010, to do the legwork Bob was asking for. The night before we left, a friend of ours who had graciously offered to keep our wood burning outdoor furnace stoked while we were gone, gave a specific word to Rhonda about Los Cabos. His strong word from the Lord was, “This trip is very important to the fulfillment of Rhonda’s destiny, and God will open doors that no man can shut and shut doors that no man can open.”

When we arrived at Cabo in February, our goal was to meet with as many pastors as we could and to get their contact information for future areawide events, to meet like minded believers and to see what divine appointments the Lord would lead us in. Our message was to proclaim what the Lord wanted to do in Los Cabos and to try to unite believers and leaders in prayer for preparation for the revival meetings with Bob in May of 2010. As we set out with this goal, the believers we met who were specifically drawn to Cabo (even as we had been) and the reports of what the Lord was telling many, of His intent for a move of the Spirit in ‘last day’ proportion in Los Cabos, were amazing (in only a one week period). During this time in Cabo we kept in close contact with Bob, keeping him updated on our progress—he could hardly contain his excitement!

When we returned to Michigan Bob said he would call us weekly to continue to plan the revival meetings in May. At one time it had been two weeks since we had heard from him, so we gave him a call. His wife Suzy answered and after a lengthy account of some health problem Bob had suddenly had, told us that Bob had just died and was at home with the Lord. Bob would have been the first to tell you that God makes no mistakes and there is no doubt in our minds, but we have to tell you this was quite the shock. Suzy then told us to take what Bob had imparted to us and to return to Cabo to fulfill the vision of mass revival that Bob was so sure of.

God is good - all the time and in all His ways.  We say this as we look back through the past four years and think about how Operation Cabo began and the many divine appointments along the way.  From the beginning, it has been God's heart to reach His people here in Los Cabos.  It is His desire to bring about a great revival as never seen before.

As God has led us from divine appointment to divine appointment, we have met with many pastors and believers.  We've worked with Pastor Carlos Maciel of the Cristo es el Camino Church - helping him build a new church and parsonage.  We've been blessed to visit area feeding stations and see the MVP program in action.  What we never anticipated, though, was teaching at a local school - then came more of God's divine appointments.  One appointment after another led us to meet Elsa Aramburu, the owner of a bi-lingual Christian school in San Jose Centro - the only Christian school in the area.  Elsa shared her need for English-speaking teachers with American accents.  God then began the work of tugging on our hearts.  The next thing we knew, we were packed and ready for full-time ministry - beginning a new leg of Operation Cabo.

God continues to bring divine appointments across our paths as we meet with old and new friends and continue to minister wherever God leads.